There are several methods for determining the presence of specific nucleotide sequences based on real-time fluorescent detection. The most common are the techniques with intercalating dye SYBR Green I, methods based on destructible oligonucleotide probes (TaqMan), hairpin structures (Scorpions). It is extremely important for test-system to select method of detection, because each of the methods has its own pros and cons, application field and features.

In our kits widely accepted method of detection is used that is based on phenomenon of Fluorescence Resonance Energy Transfer (FRET). The TaqMan technology based on destructible oligonucleotide probes with chemical modifications of LNA (locked nucleic acids) allows achieving high sensitivity and specificity of the kits and overcoming such disadvantages of other approaches as low specificity and frequent false-positive results, and also the inconvenience associated with the necessity to perform test in two separate test tubes for intercalating dye SYBR Green I. The TaqMan-LNA method is universal and can be applied to any polymorphic markers or mutations.

We have developed and tested in the laboratories of the Russian Federation and the CIS kits for more than 300 polymorphic markers of the human genome. Kits are compatible with all popular Real-Time thermal cycler: ABI 7300/7500 / StepOne, Bio-Rad iQ5 / CFX, Rotor-Gene 3000/6000, DT-prime and etc.

The kits are intended for 200-2000 tests per one locus and include all of the reagents sufficient for genotyping of rated amount of DNA samples in 10 mcl of the reaction mixture at one locus (SNP). Reaction volume can be varied depending on the thermocycler model (from 5 to 20 mcl).

Two DNA probes are added to the reaction mixture (to two alleles of investigated polymorphism), each of which contains a fluorescent label and a fluorescence quencher. The initial solution has a minimal fluorescence background, but as a result of amplification the fluorescent dyes are released and this equates to detect the presence of any alleles of DNA sample in the amplified mixture. Special amplification conditions and design of the probes allow achieving high specific separate determination of two alleles in a single reaction tube. 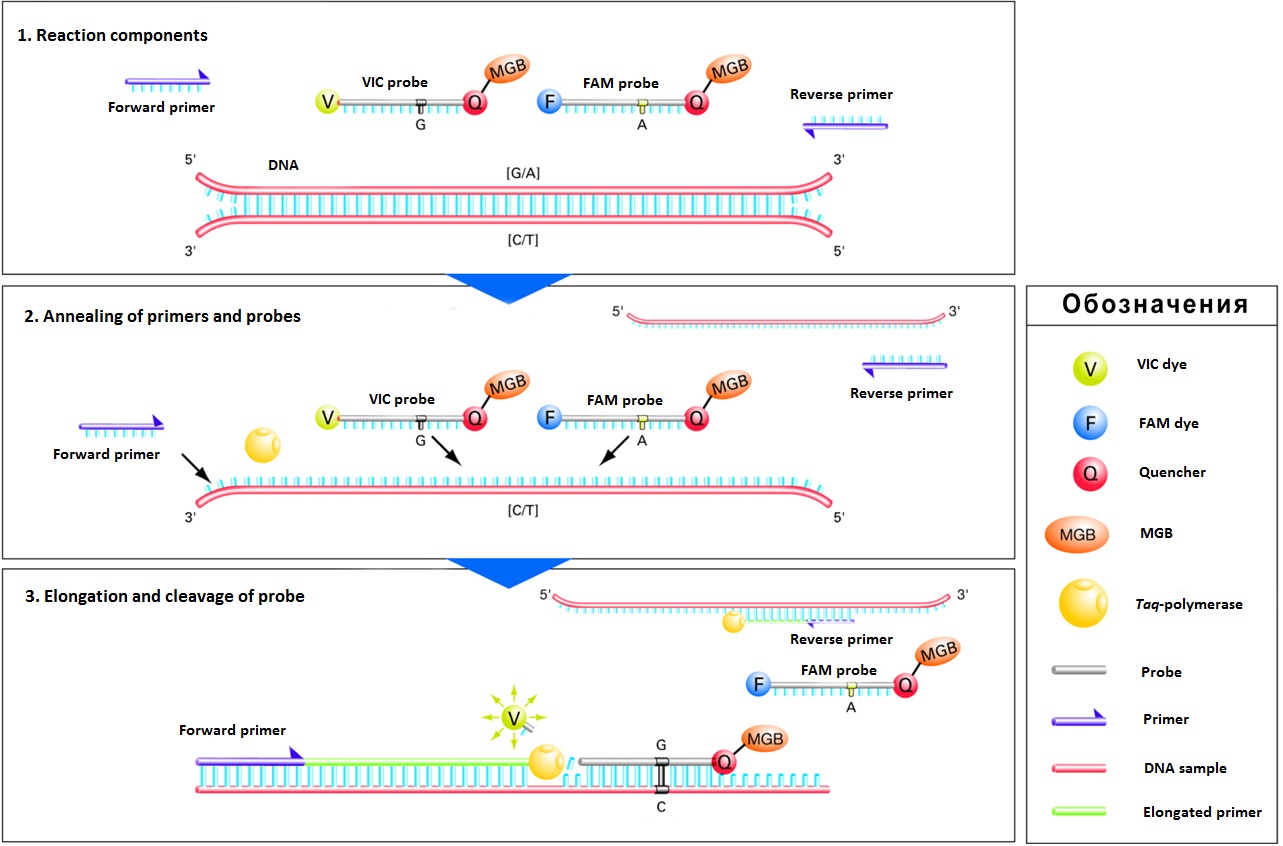 TaqMan analysis is based on 5`-nuclease activity of Taq-polymerase which cleaves nucleotides from the oligonucleotide probes hybridized with DNA. Two TaqMan probes and two different polymorphic sites are required. One probe should be complementary to the wild allele and the other one - to the polymorphic allele. These probes have different fluorescent dyes on 5`-termini and fluorescence quenchers on 3`-termini. While the probes are inactive, the quenchers interact with the dye through FRET mechanism and disable fluorescent activity. During annealing stage of PCR TaqMan probes are hybridized with DNA molecule. During denaturation stage of PCR 5`-termini dye is cleaved due to 5`-nuclease activity of Taq polymerase. That leads to increasing of the dye fluorescence intensity. A base mismatch leads to cleavage of the entire probe, without release of the dye. The genotype sample is determined by the ratio of fluorescence intensity of two different dyes.

Testgene uses cookies to ensure your experience and make the website more convenient to use. Cookies are small files that contain information about previous visits to websites. If you want to stop accepting cookies, please change your browser settings.